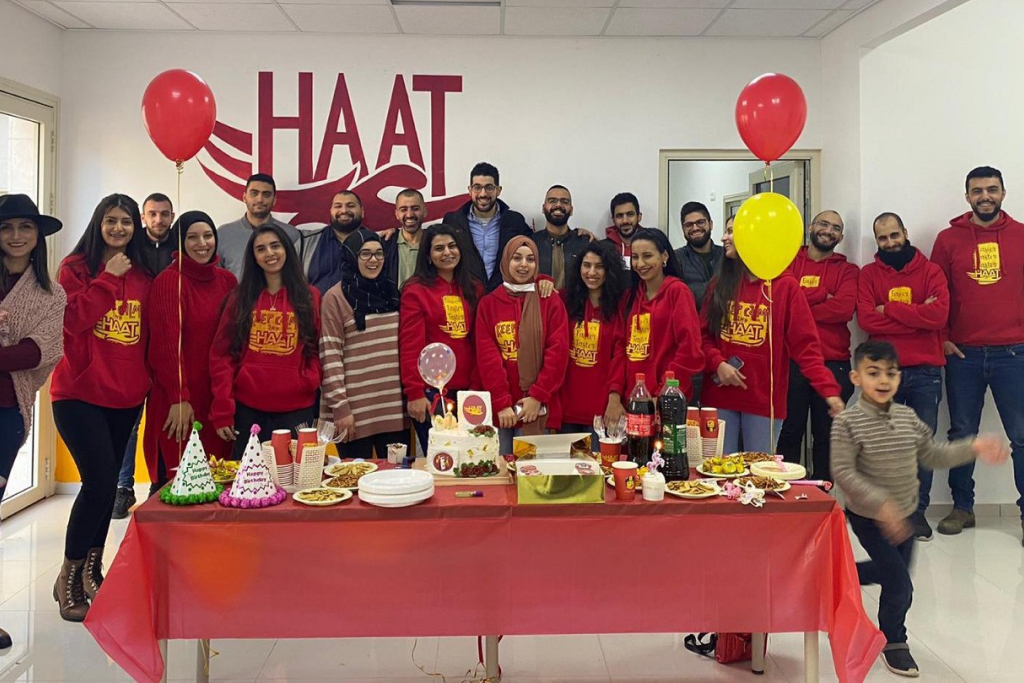 If you are plugged into the startup world, you have most probably heard of Hasan Abasi, the CEO and co-founder of HAAT.

Hasan has a doctorate in computer science and was one of the developers of the autonomous vehicle at Google, yet when he returned to his home in Umm al-Fahm, he couldn’t even get a food delivery.

It was at that moment when he realized something needed changing, and that he had the technological know-how and experience to be that change. Since then, Hasan and his team developed HAAT, the startup with the mission to make food delivery possible, not only in Tel Aviv, but in all corners of the country and eventually the world. With 3,000 orders a day, a team of 75 employees, and 400 drivers, they are well on their way.

HAAT recently joined our Junction program where they will continue to work on their expansion. I got the honor to sit down with Hasan and get some insights about his forward-thinking startup, the reverberating impacts of HAAT, and their plans for the future.

HAAT was created from scratch

Despite the fact that many food delivery apps already exist, when Hasan and his co-founder, Ali Ayoub, started developing their product, they did not turn to existing apps for inspiration, rather they chose to design their platform from 0–100 on their own.

“I purposefully did not look at any of [the existing apps] when I started building HAAT as I did not want to go in with any bias- I wanted something fresh, new, and built solely to fit our unique needs”

So, they went for it the old-fashioned way and started with PowerPoint. Literally envisioning and building every aspect of their product slide by slide, from the user experience, to the drivers, to the restaurants.

“As the slides started to build up and grow, we were getting more and more excited, realizing…wow, we are actually building something amazing here!”

HAAT’s growth was exponential and organic

There is a difference between products that are ‘nice to have’, and those that are essential, and you can usually tell by how they are received when first launched. For HAAT, it was clear immediately that they were providing an essential need in those communities where food deliveries were almost non-existent.

“The very first day we launched our product- keep in mind all we had done to promote the app was a single FB post- we got eight orders,” relates Hasan.

The rest of the year followed suit- with zero promotion, HAAT grew as organically as they did rapidly, and stands today with 400 drivers, and 80 employees.

How HAAT overcomes the challenges of peripheral deliveries

The obvious question is- how come no existing delivery app has entered these periphery communities and beyond, and what allows HAAT to be so successful? I posed this question to Hasan who gave me three distinct reasons why HAAT has conquered this market:

The first is location (or lack thereof). Many customers in the communities to which HAAT deliver do not have exact addresses.

The second is cash payment. Up to 80% of their customers do not use credit cards, and as we all know, dealing with cash is an organizational and legal nightmare.

The third is culture. Hiring, recruiting, and working as the connector between restaurant and customer demands and understanding of the culture with the people around you.

Hasan and his team continue to overcome these challenges with forward-thinking technology, creative administration, and their inclusive culture.

Hasan has become a role model in the Arab communities, which up to now have had little to no exposure to the tech scene and the opportunities the startup nation has to offer.

Showing me pictures of a school group that came to visit HAAT’s headquarters, Hasan relates stories of being stopped on the street by people who recognize him, and the overwhelming support he has gotten from the community which sees the incredible success HAAT has already achieved and are inspired to make their own startup dreams a reality.